You are here
Home > Other Orkney Things > The Ring of Brodgar 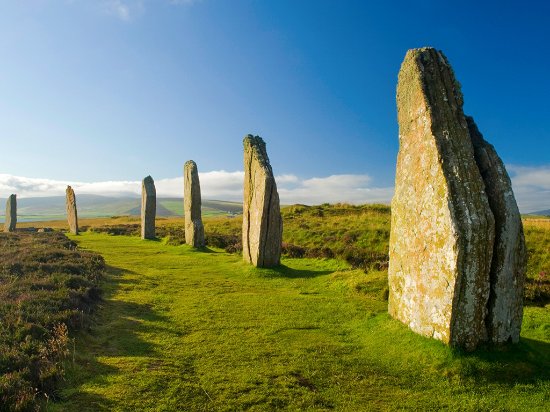 (ON Bruar-gardr, Bridge Farm) is situated on a peninsula between the Lochs of Harray and Stenness, in the heart of the West Mainland.  This very fine stone circle originally comprised 60 megaliths, of which 27 remain upright.  It is a perfect circle, 103.7m in diameter and is surrounded by a rock-cut ditch 10m across and over 3m deep.

Dating from the same Neolithic period as Maeshowe and Skara Brae, the construction of the henge and ditch would have taken a lot of labour, implying an organised society with spare resources and some kind of strong beliefs.  As with Maeshowe, the monument has been carefully situated, with clear views in all directions.

The monoliths resemble the uprights within Maeshowe in size and shape, ranging from about 2m to 4.5m in height, and often with angular faces or notches on one side.  They are all aligned with their flat sides facing into the centre of the circle.

There is an outlying standing stone, the Comet Stone, to the south east as well as several mounds nearby which could date from the  Bronze Age.  They may perhaps be points for viewing the variety of solar alignments relating to the solstices, equinoxes, Beltane and other dates which have been observed or suggested.

This may have been the intention of the designer or not, but will always remain enigmatic. Alignments with lunar phenomena have also been observed and suggested, particularly at the times of major lunar standstills, every 18.6 years.

Nowhere does the feeling of space, where water, land and sky all seem to merge feel stronger than at Brodgar.  The constantly changing Orkney light and weather mean that the site can be visited at any season or time of day and always look different.  Although we know nothing about the beliefs of the Neolithic people who built the Ring of Brodgar it is clear that they were a highly motivated and imaginative society.